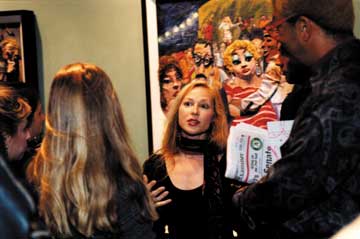 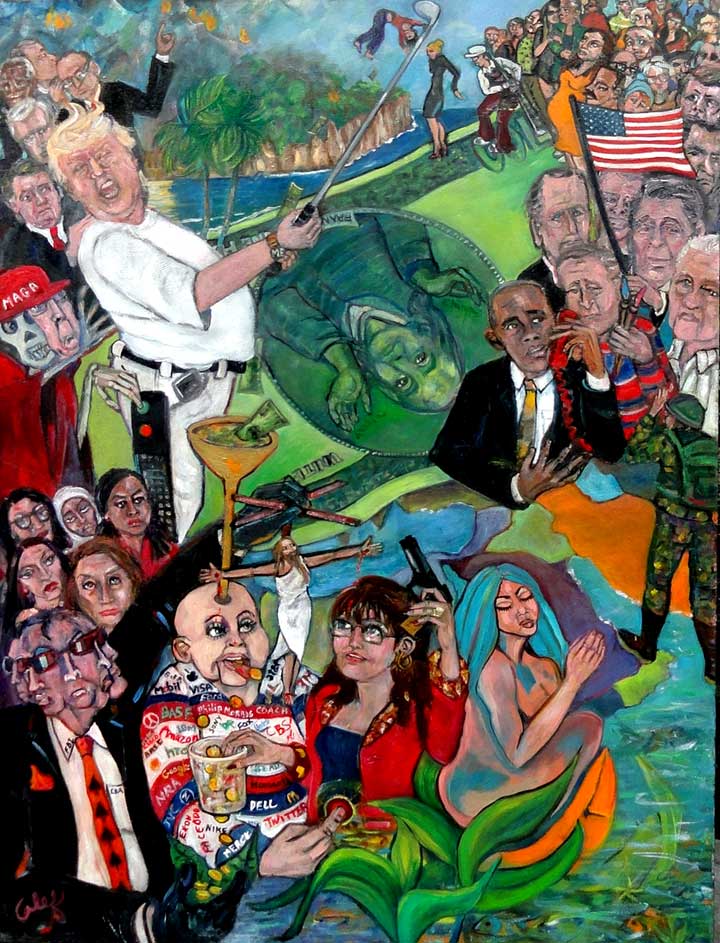 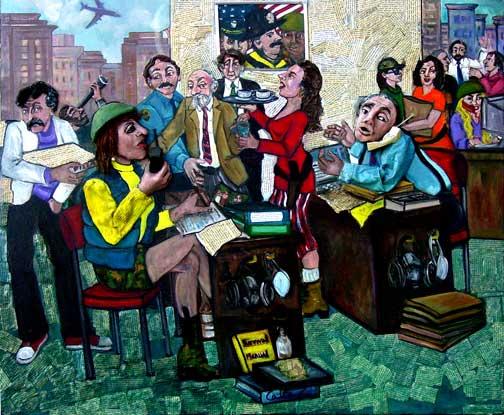 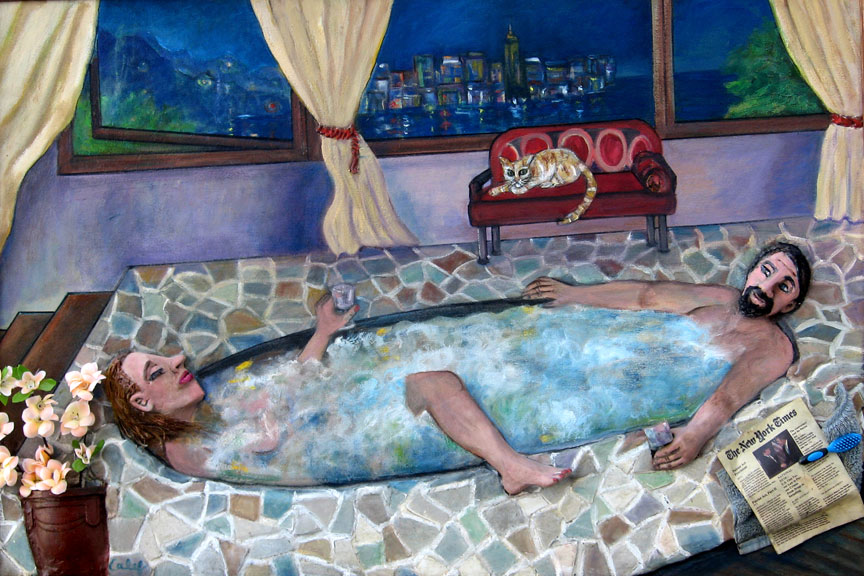 The tranquil and panoramic hot-tub setting, where the characters privately
luxuriate, is in stark contrast to the provisions of the Patriot Act, which seductively
diminishes our fundamental liberties. 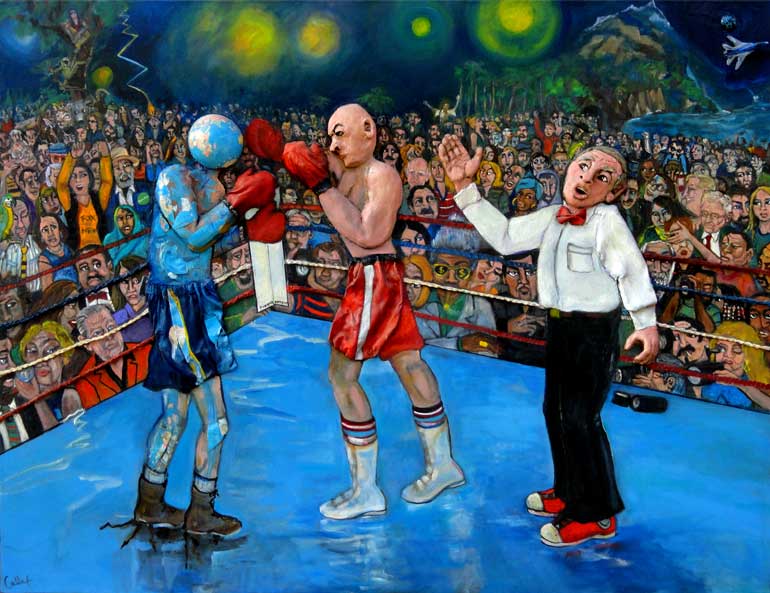 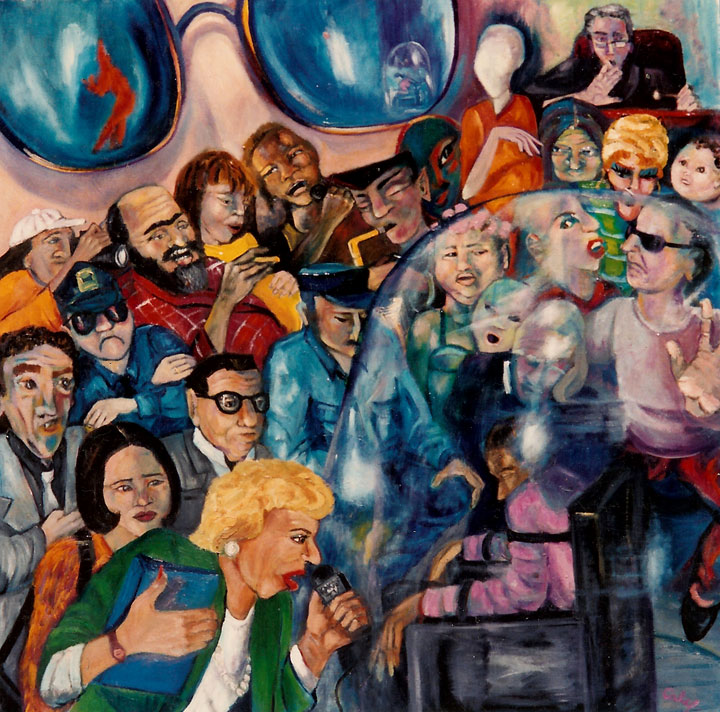 People often buy artwork to match their couch, and given the delicate subject of capital
punishment, along with the media, and public opinion, It Goes With the Couch Chair also considers
the karmic implications of a society that legally kills. 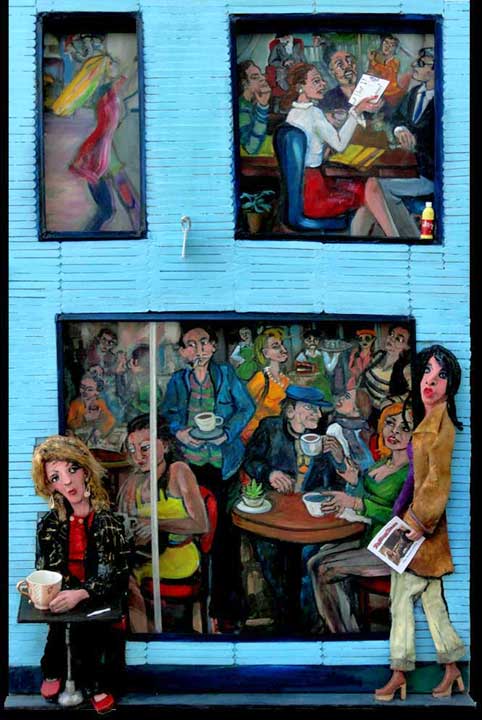 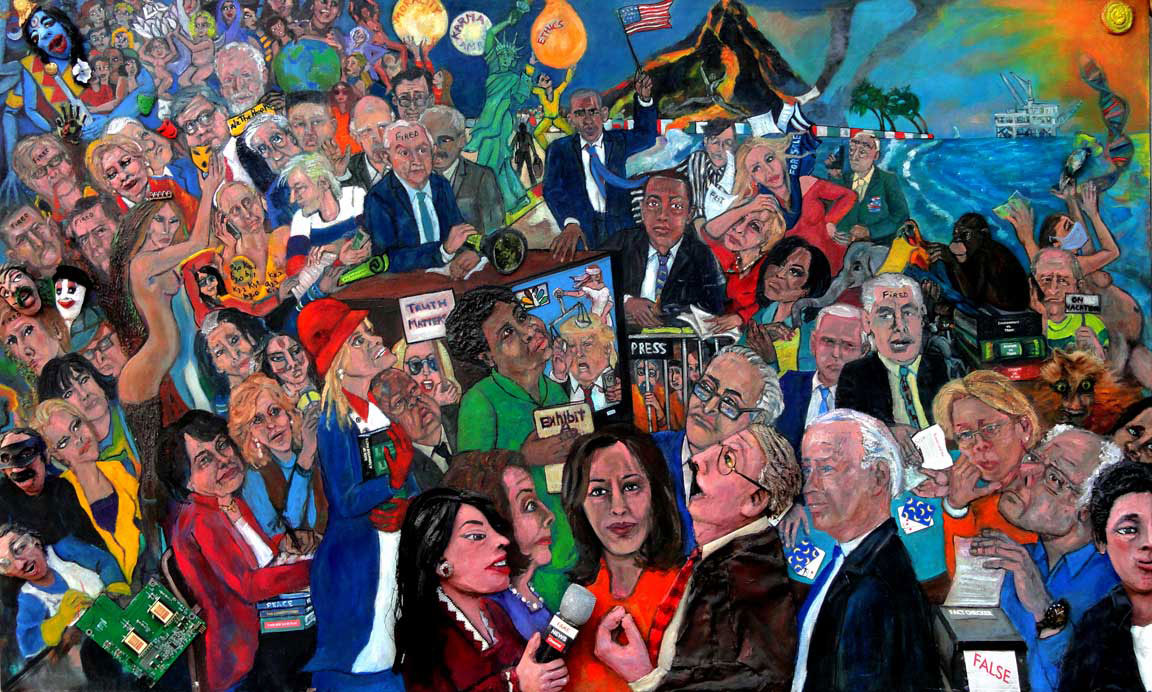 I worked on this vignette-filled journey for a year, in search of "the objective truth" through historical characters relevant to our current political landscape.  Kali, the Hindu goddess of Time, Creation, Destruction and Power embraces her children in the midst of global power struggles; the politicians gamble, juggling honesty and suppression of facts, while masked terrorists ignite chaos and the Fake News channel craves an interview. TV president has his tiny thumb on Lady Justice's scales, imprisons the press and chips away at the fabric of Democracy, distracting the public with the antics of his cadre of advisors, political appointees and family goons.  Liberty balances on a surfboard as immigrants depart through the Mexican wall.  Michelle Obama feeds information to the animal kingdom, as Senators gather around the fact checker. The election of Joe Biden and Kamala Harris promises to lead the country in a more humane direction. 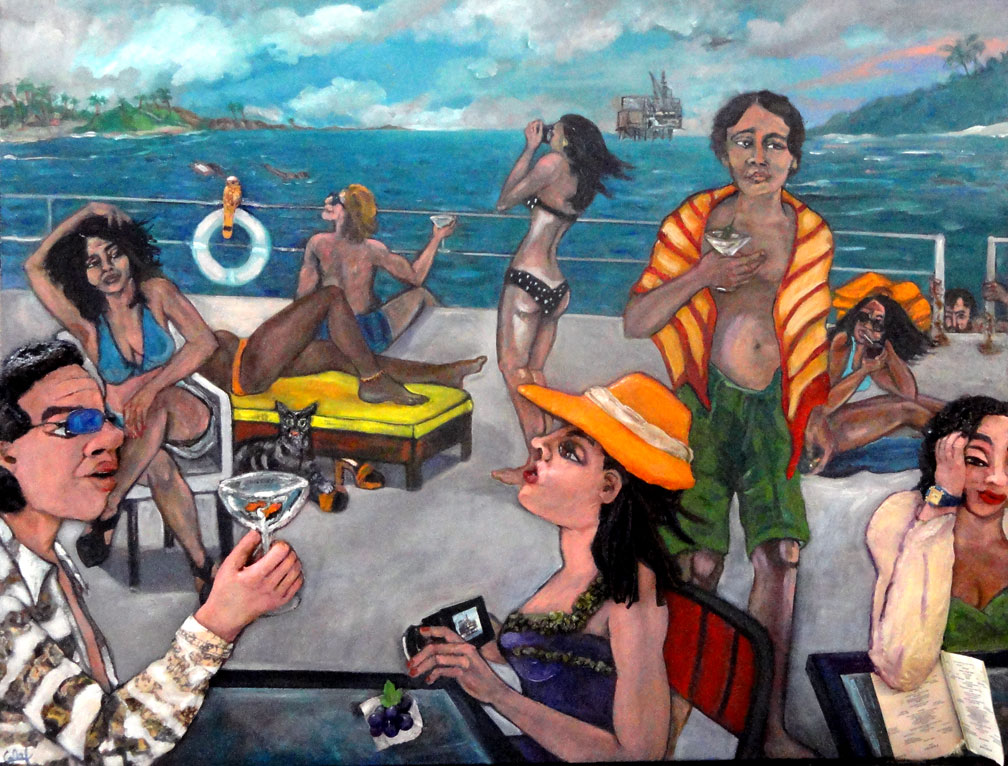 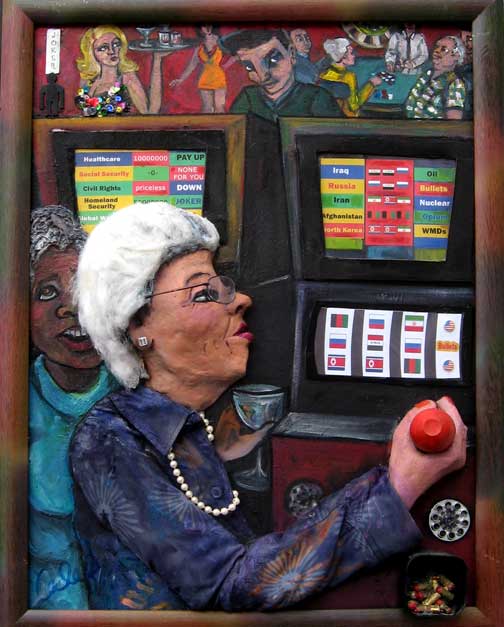 The unrepresented come together in the fight for justice against all odds.
The 3d police, children & dog exaggerate both the aggressor and the victim mentality.
Barack Obama Presidential inauguration invites hope backdropped by Bush's helicopter
departure; prejudice boil over and many wait with impatience and skepticism. 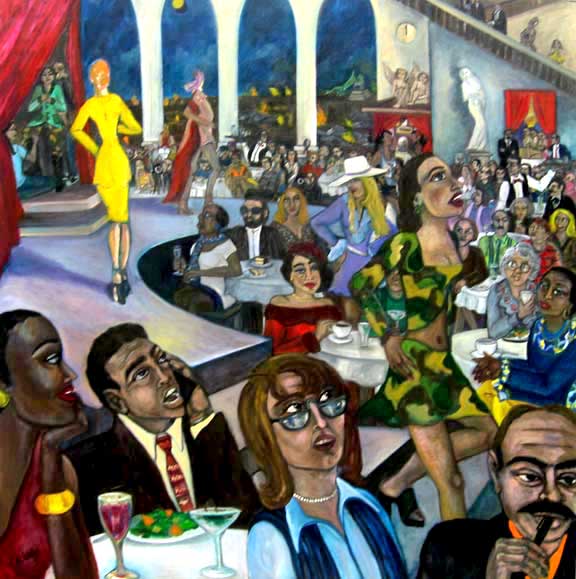 Haute Coutere reflects the Post 9/11 culture of the war on terror, while the Statute of Liberty lies in ruins. 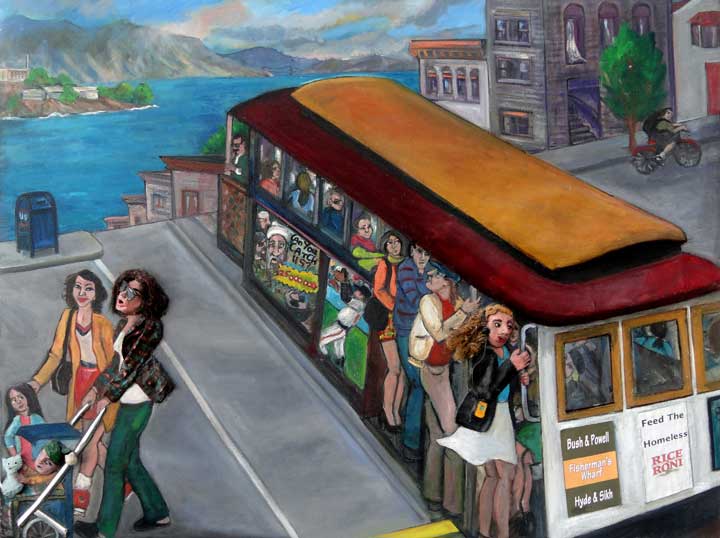 Not only are Bush and Powell powerful men, they are a cable car stop in San Francisco.
Billboards comment on the continuing Middle Eastern crisis. 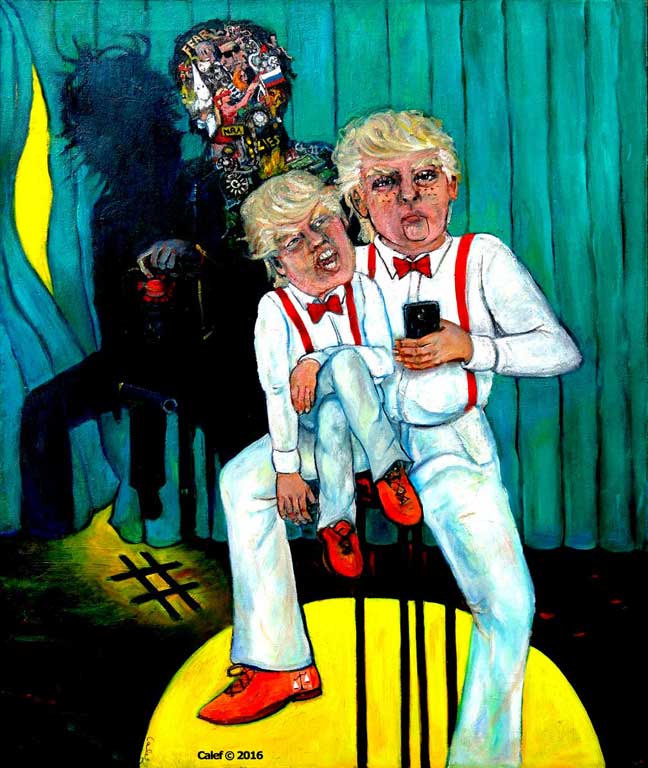 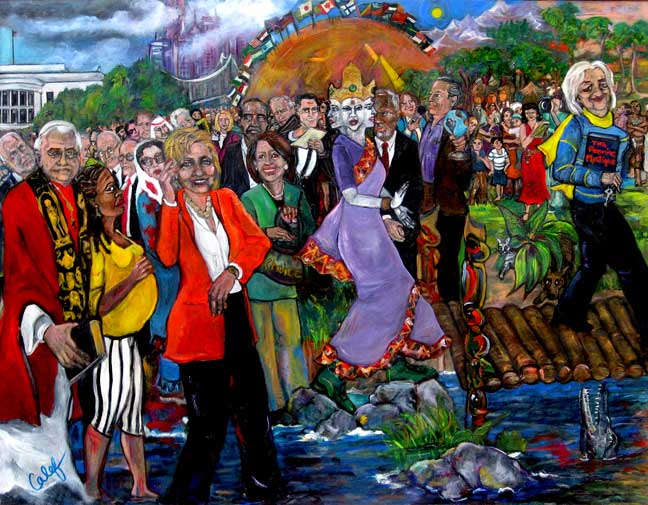 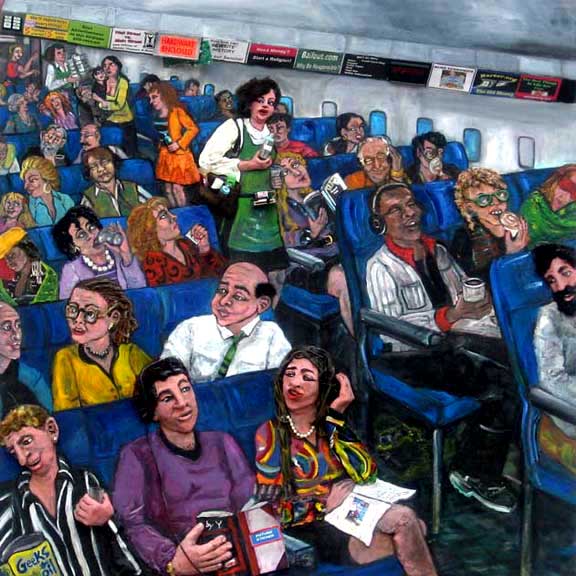 The  near future of commercial travel is highlighted:  advertisements blare on the
overhead compartments, while the air hostess sells oxygen, toilet paper and water.
Bernie Madoff sits beside a woman studying up on his corruption in Madoff Gate. 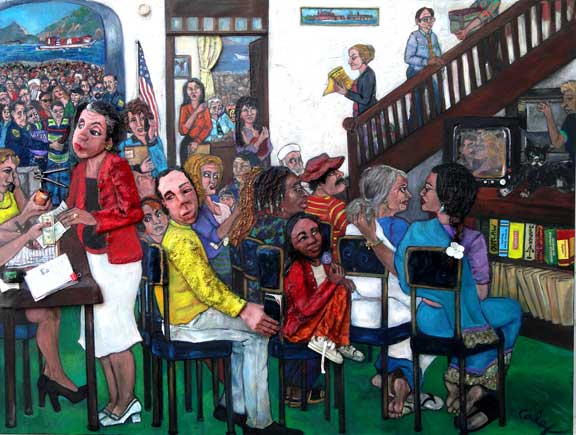 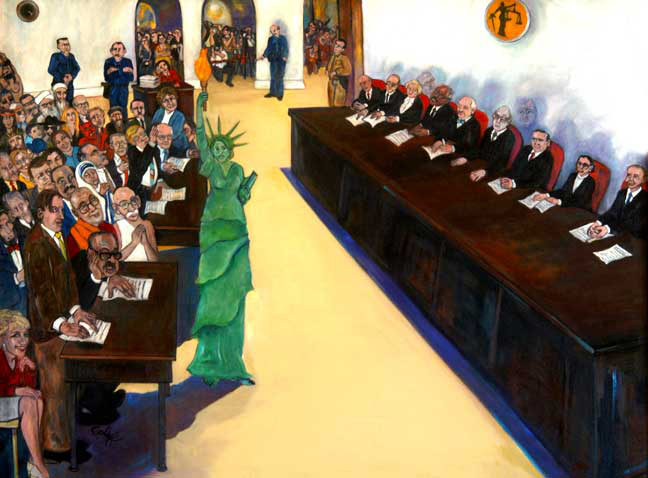 The Statue of Liberty is on trial, while the historical figures in the gallery
represent good and evil, from Clarence Darrow, Thurgood Marshall, Gandhi, Dalai Lama,
Abraham Lincoln, to Nixon, Bush, Cheney, Rove, Bin Laden, Sadam Hussein, among others. 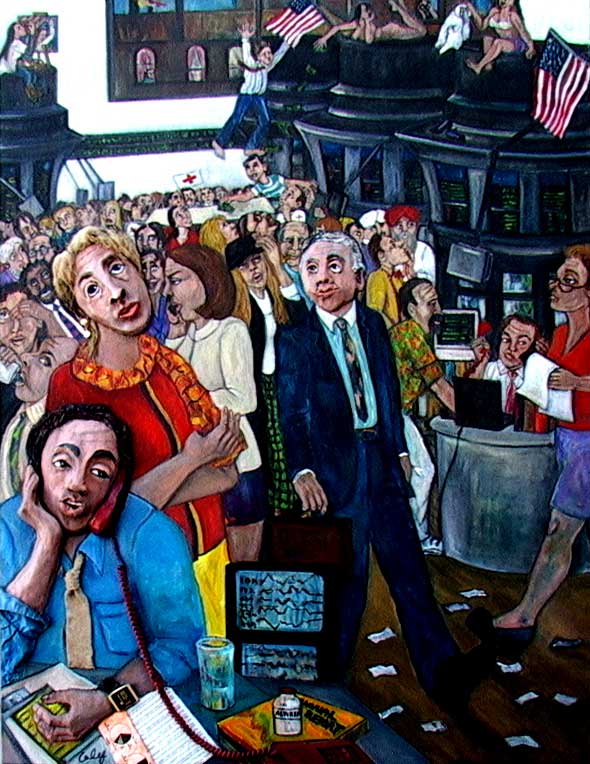 The stock exchange in all its madness, highlighting our culture's relationship to money.